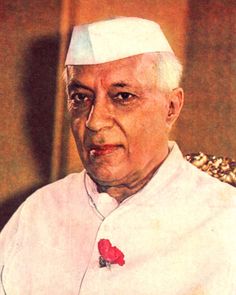 Jawaharlal Nehru was the first Prime Minister of India and a central figure in Indian politics for much of the 20th century. He emerged as the paramount leader of the Indian independence movement under the tutelage of Mahatma Gandhi and ruled India from its establishment as an independent nation in 1947 until his death in office in 1964. Nehru is considered to be the architect of the modern Indian nation-state: a sovereign, socialist, secular, and democratic republic.

The son of Motilal Nehru, a prominent lawyer and one of the Mohandas (Mahatma) Gandhi’s prominent lieutenants and nationalist statesman, Nehru was a graduate of Trinity College, Cambridge, and the Inner Temple, where he trained to be a barrister. Upon his return to India, he enrolled at the Allahabad High Court and took an interest in national politics, which eventually replaced his legal practice

He became the prominent leader of the left-wing factions of the Indian National Congress during the 1920s, and eventually of the entire Congress, with the tacit approval of his mentor, Gandhi. As Congress President in 1929, Nehru called for complete independence from the British Raj and instigated the Congress’s decisive shift towards the left.

Nehru met Gandhi for the first time in 1916 at the annual meeting of the Indian National Congress (Congress Party) in Lucknow. Gandhi was 20 years his senior. Nehru did not assume a leadership role in Indian politics, however, until his election as Congress president in 1929, when he presided over the historic session at Lahore that proclaimed complete independence as India’s political goal.

The first big national involvement of Nehru came at the onset of the non-co-operation movement in 1920. Nehru was arrested on charges of anti-governmental activities in 1921 and was released a few months later. In the rift that formed within the Congress following the sudden closure of the non-co-operation movement after the Chauri Chaura incident, Nehru remained loyal to Gandhi and did not join the Swaraj Party formed by his father Motilal Nehru and CR Das.

Must Read: Nehru Memorial Museum and Library Resignation of its Director

Nehru was a renowned orator. He could give many extemporaneous speeches in a single day. His most famous speech is the “Tryst with Destiny” address to the Constituent Assembly of India in New Delhi on the night of August 14th and 15th, 1947.

He remained popular with the people of India in spite of political troubles in his final years and failure of leadership during the 1962 Sino-Indian War.

Jawaharlal was the eldest of four children, two of whom were girls. A sister, Vijaya Lakshmi Pandit, later became the first woman president of the United Nations General Assembly.

Pandit Nehru loved children and they call him affectionately as Chacha Nehru. His birthday is observed as Children’s Day. He believed that children are the future of the nation.

Nehru was a prolific writer in English and wrote a number of books, such as The Discovery of India, Glimpses of World History, and his autobiography, Toward Freedom.