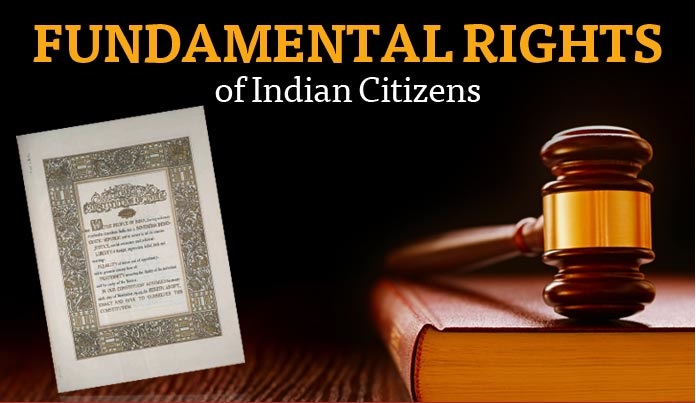 The Fundamental Right is a charter of rights contained in the Constitution of India. It guarantees civil liberties such that all Indians can lead their lives in peace and harmony as citizens of India. These include individual rights common to most liberal democracies, such as equality before the law, freedom of speech and expression, and peaceful assembly, freedom to practice religion, and the right to constitutional remedies for the protection of civil rights.

The Fundamental Rights are defined as basic human freedoms which every Indian citizen has the right to enjoy for a proper and harmonious development of personality. These rights universally apply to all citizens, irrespective of race, place of birth, religion, caste or gender.

Changes to the fundamental rights require a constitutional amendment which has to be passed by a special majority of both houses of Parliament. This means that an amendment requires the approval of two-thirds of the members present and voting. The number of members voting should not be less than the simple majority of the house – whether the Lok Sabha or Rajya Sabha.

Members of Congress composed of a large majority, Congress leaders appointed persons from diverse political backgrounds to the responsibilities of developing the constitution and national laws. Bhimrao Ramji Ambedkar became the chairperson of the drafting committee, while Jawaharlal Nehru and Sardar Vallabhbhai Patel became chairpersons of committees and sub-committees responsible for different subjects. A notable development during that period having a significant effect on the Indian constitution took place on 10 December 1948 when the United Nations General Assembly adopted the Universal Declaration of Human Rights and called upon all member states to adopt these rights in their respective constitutions.

Right to equality, including equality before the law, prohibition of discrimination on grounds of religion, race, caste, gender or place of birth, and equality of opportunity in matters of employment, the abolition of untouchability and abolition of titles.

Right to freedom which includes speech and expression, assembly, association or union or cooperatives, movement, residence, and right to practice any profession or occupation (some of these rights are subject to security of the State, friendly relations with foreign countries, public order, decency or morality), right to life and liberty, right to education, protection in respect to conviction in offences and protection against arrest and detention in certain cases.

Right against exploitation, prohibiting all forms of forced labour, child labour and traffic in human beings.

Cultural and Educational rights preserving Right of any section of citizens to conserve their culture, language or script, and right of minorities to establish and administer educational institutions of their choice.

Right to constitutional remedies for the enforcement of Fundamental Rights.