My account
Get into your account.
LoginRegister
Plans
Home Learn History Economic Condition During the Delhi Sultanate 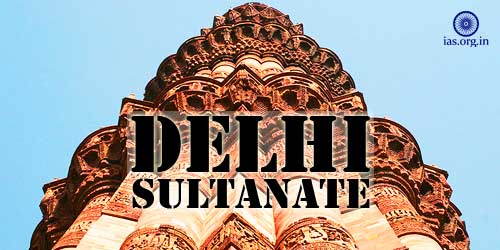 The history of the Delhi Sultanate is the history of five dynasties which among themselves covered the period from 1206 to 1526.

The 5 Dynasties of Delhi Sultanate were:

Must Read: The Administrative System under Delhi

The foreigners, the Persians, the Arabs, the Abyssinians and the Egyptians, who were associated with the Turks, formed an exclusive ruling oligarchy. The Turks, the most jealous guardian of this foreign aristocracy, were ipso facto its leaders. They monopolized power, throughout the 13th century, and played the role of leader of the Muslim people in Asia. From Qutb-ud-din Aibak down to Kaiqubad the Sultans rightly stuck to the policy of Turkish monopoly of authority and Balban openly showed his hatred for “low-born non-Turks”.

As a heterogeneous ruling class cannot be expected to work with a common aim and purpose, so the same happened with the Sultanate period: the nobility of the Sultanate period, despite the fact that they were united against non-Muslim during the war, was torn in times of peace by personal ambition, rivalry and even hospitality and generally carried on selfish interest to the detriment of the welfare state.

During the medieval age, of which the major portion, in terms of time belongs to the Delhi Sultanate, the then India was renewed for her incredible wealth. It was the story of our enormous wealth that enticed Mahmud of Ghazni and his plundering hordes to attack the prosperous capital of our Kingdoms and Plunder our temples. Contempory accounts of period make us believe that by plundering Muhammad Bin Qasim in Sind and Multand and Mahmud of Ghazni in Hindustan acquired a vast plunder that included coined, uncoined money, precious stone of various kinds and a variety of other goods valued at crore of rupees. Thus, the economic prosperity of our country during the Delhi Sultanate, the Turko –Afghan, period, is beyond question.

You Must Read: Administrative Structure under the Mughals

The Source of Wealth

In the period, which we are discussing here, agriculture was the main source of our wealth. In most parts of the are under the Delhi Sultanate or during medieval age, the natural fertility of the soil, copious rainfall and irrigation facilities, catered since the early times and their systematic rain forcement by Firoz Tughlaq, in combination with the industry of our peasants, led to the production of so much corn that it not only successfully fulfilled the demand of the country but was also exported to other countries.

Red crops such as sugarcane, cotton, oil seeds, lintels, indigo, poppy etc. were produced on a large scale. Fruits of numerous varieties, as we are informed that during the reign of Firoz Tughlaq most fruits were grown in the gardens, were a considerable source of revenue.

You May Love to Read: The Later Mughals of the (Mighty) Mughal Empire

Although the bulk of the people were engaged in the occupation of agriculture, there were many important industries in the rural as well as urban areas of our country. Moreover, it is a well documented historical fact that centuries before the arrival of Turks, our country was industrially well-organized.

There were guilds and crafts in the villages and in towns, which continued with widespread commerce. These industries, inspite of the absence of Sate-support endured the shock of foreign invasion’ and internal revolutions.

There were, during the Delhi Sultanate period, two types of industries: those that were under the State patronage and those that were completely private. The Sultans had their own Karkhanas (work shops) in Delhi in which many thousands of weavers were employed to produce silk and other stuffs; in these Karkhanas thousands of yards of silk and cotton cloth were produced every year for the preparation of robes of honour. The other kind of workshops, were for gold and silver articles and embroidery, and so on. As far as the private industries was concerned, the most important among them were the textile industry, that included in itself manufacturing of cloth, woolen and silk cloth, sugar industry, paper industry, etc.

India exported, as she had commercial relations with the outside world, agricultural goods, textile manufactures, both cotton and silk, and some other things, such as, opium, indigo, etc. India’s Chief imports were horses, mules and articles of luxury for the royal families and the nobility.

It is obvious that the value of India’s exports was much greater than that of the imports and the balance of trade was always in her favour. So it can fairly be ascertained that although State, during the Delhi Sultanate period, did not appropriate a comprehensive economic policy with the object of promoting the material condition of the people in general, yet the volume of trade, both internal and external, carried out by the people of the country, was enormous.

In short it can be claimed that the prosperity of that time can be testified by contemporary, both India and foreign, sources. Marco Polo, who visited southern India between 1218 and 1293; Ibn Batuta, who travelled in most parts of India between 1334 and 1342; and Mahuan, a Chinese, who visited Bengal in 1406, all of them, have left an account of India that shows that both industrially and economically, India was prosperous and that there was a “great abundance of all the necessaries of life”.