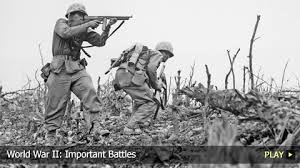 Battle of Salamis (480 BC): The Greek fleet defeated the Persians.

The Crusades (11th – 13th Centuries): Military expeditions of the Christians in Western Europe to get back the Holy lands from Muslims; result; the Holy city remained with Turks.

Hundred Years War (1338-1453): Fought between France and England; came to an end by the heroism of Joan of Arc who was burnt Alive.

Anglo – Spanish War of the Defeat of Spanish Armada (1588): The British fleet under Howard and Drake defeated the Spanish fleet Armada.

Battle of Gibralter Bay (1606-37): The Dutch defeated the Spaniards and the Portuguese.

Seven Years of Anglo-French War III (1756-63): Fought by Britain and Prussia against Austria, France, and later Russia; the Treaty of Paris brought an end to it.

Battle of Bunker Hill: The first battle of the War of American Independence; fought at Charlestown, Boston.

Battle of Pyramids (July 1798): Napoleon emerged victorious over the Mameluke rulers of Egypt.

Battle of Nile (August 1798): The British fleet under Lord Nelson defeated the French fleet and established their supremacy over the Mediterranean Sea.

Battle of Leipzig or Battle of Nations (1813): Napoleon was defeated by the English and the Allies; he abdicated in the following year.

Battle of Waterloo (1815): The British under Duke of Wellington (Sir Arthur Wellesley) defeated the French under Napoleon; Napoleon was captured and exiled to St. Helena where he died.

Opium War (1839Opium War (183-42): Fought between Britain and China; immediate cause: Chinese protest over opium import into China by the British.

American Civil War (1861-65): Northern states of America under Abraham Lincoln defeated the Southern states and established a Federal-State; cause: Antagonism between the agricultural, slave-owing South and the industrial North.

Spanish-American War (1898): The war fought by the USA and Cuban revolutionaries against Spain to free Cuba from Spanish rule; result: Cuba came under the US forces.

Battle of Omdurman (1898): The British and Egyptian forces defeated the forces of Khalifa (Mehdists.)

Russo-Japanese War (1904-05): Russia defeated; Treaty of Portsmouth (1905) brought an end to the war; also known as the Battle of the Sea of Japan.

World War I (1914-18): Root Causes: Austria-Serbia rivalry and Franco-German rivalry; immediate cause: assassination of the heir to the Austrian throne by a Serb; the warring sides were: Austria, Bulgaria, Germany, Hungary and Turkey (Central Powers) against Belgium, England, and France, and later Italy, Russia and USA (Allied Powers); Result: Central or Axis Powers were defeated; the Treaty of Versailles (1919) brought an end to the War.

Spanish Civil War (1936-39): Fought between Fascist and republican forces; rebels were helped by Germany and Italy, while the government was aided by Russia and Mexico.

World War II (1939-45): Resulted due to the unjust Treaty of Versailles as both Germany and Italy were dissatisfied with it; rise of fascist forces, such as Nazis in Germany; imperialism of England and France; and Japan’s expansionist ambitions; warring factions; Germany, Italy and Japan (Axis Powers) against Britain, France, Russia, USA, Poland etc. (Allied Powers); Result: Allied Powers emerged victorious; Germany divided, emergence of Russia as a big Power.

Algerian War of Independence (1947-62): The war was fought against French with which Algeria had been politically unified.

Iran-Iraq War (1980-88): Occurred due to boundary disputes between two countries; heavy losses on both sides; a ceasefire in August 1988.

Falklands War (1982): The war was fought between the British and Argentine forces over the claim on the Falklands Islands in the South Atlantic Ocean; British regained control of the Islands.

Gulf War (1991): Followed the Iraqi invasion of Kuwait; a coalition of about 40 countries, including the UK and the USA, defeated Iraq