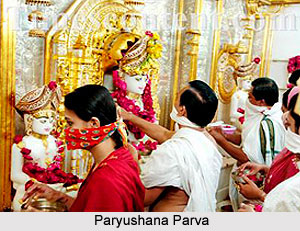 Today Supreme court refused a plea supporting state government’s decision to ban sale of meat and slaughter in Mumbai during the Paryushan festival,  It said that meat bans cannot be “shoved down someone’s throat”.

What is Paryushan Festival?

Popularly known as Paryushan festival or Parv among Svetambaras and Das Lakshana among Digambaras, is an important Jain festival. Duration of the festival is 8 days for Svetambaras and 10 days for Digambaras.  During festival Jains observe a fast, which may be for 1 to 30 days. All Jains meditate and pray for all 8 or 10 days generally in August or September.

Must Read: Events and Festivals in Puri

Why this news is important?

1. A cultural festival is associated with this news
2. An old stay order of Bombay High Court was challenged in this case
3. Ban in Jammu and Kashmir

Animals have right under Article 21.

Petitioner’s Advocate Abhishek Manu Singhvi argued in court that even animals have right under Article 21.
What can I say on this? Don’t use even mosquito repellents otherwise you may go behind bars for violating article 21 because insects must also have right under article 21.