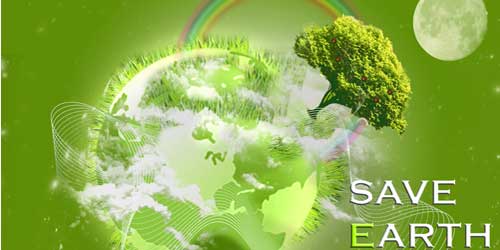 It has been wisely said that “Earth does not belong to Man, but Man belongs to earth”. However, human beings have always tried to control and exploit Earth for their own benefits without even taking a pause to think over their deeds.

A recent report claimed that “Earth Overshoot Day” had fallen six days sooner in August 2015, than in 2015. It was especially pointed out that over the past 15 years, Earth Overshoot Day had been constantly moving forward in the calendar from October 1 in 2000 to August 13 last year, indicating that we had already spent earth’s entire ecological budget for the year 2015. Earth overshoot Day is the day when global demand for natural resources exceeds what the planet’s ecosystem can renew in a year.

The ever increasing desire of human being to enhance their standard of living as well as the expanding world population has resulted in technological innovations of all kinds. These innovations, however, made life more comfortable at the cost of increased demands for food, air, water, minerals and energy.

But these resources are limited by the Earth’s capability to renew them. Speedy depletion of natural resources has created unprecedented changes in the global climate that in turn resulted in serious implications on the survival of both-human and animal species on earth. It is important here to recall the fact that-extinction of dinosaurs happened because of their inability to adopt to the climate changes. Some scientists have openly claimed that one-fourth of earth’s species could be headed for extinction by 2050.

What is Climate Change

Climate change has been defined as the long term change in earth’s climate on account of the natural, mechanical and anthropological processes that accrue in emission of greenhouse gasses such as CO2, methane, etc. These gasses, while setting in the stratosphere, trap the heat within the atmosphere that lead to global warming and changing climate patterns.

This climate change has resulted in frequent disasters like landslides, tsunamis, drought, famine and major health hazards not just for us but also for our future generations.

In order to think of sustainable solutions, it must be recognized that natural resources are not unlimited so their consumption must be curtailed and planned so as to secure sustainable development. Nature friendly alternative such as solar power, wind farm, hydro electricity, geo-thermal and bio-mass need to be explored and appropriately implemented into the system for the generation of power.

It is not the responsibility of any single nation but of the entire world to work for saving humanity from effects of climate change. The establishment of United Nations Framework Convention (UNFCCC) in 1992 at Rio stamped the beginning of serious global efforts in this direction. The 21st session of the United Nations climate change conference at Paris in December 2015 witnessed the countries submitting their Intended Nationally Determined Contributions (INDCs). India in its INDC has proposed to reduce greenhouse gas emissions intensity by 33-35% by promoting clean and renewable energy.