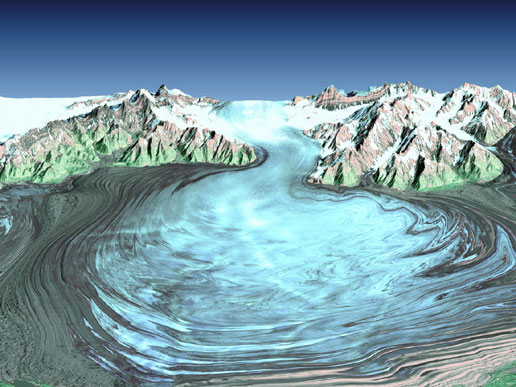 The Melting Of Himalayan Glaciers

Every conscious human being is today well aware of the fact that global warming will prove catastrophic in the near future if the rate of warming goes unchecked for a long time. Particularly, scientists are more concerned,
because they have succeeded in their effort to identify the factors responsible for this unpleasant but real phenomenon. Across the globe, lots of measures have been contemplated and the leaders of all important nations have arrived at the conclusion that global warming should be retarded and finally stopped in a phase-wise manner. Which country has to resort to what and to what extent have not yet been decided, but no country denies the fact that global warming has been caused by man and man has to do everything to curb it if life has to continue on this planet. Groups of scientists, environmentalists, NGOs and other different forums have unanimously expressed almost the
same view throughout the world. However, different views are expressed on the relation between global warming and ozone depletion or global warming and glacial retreat. Points and counterpoints pour in and the common people get confused. For example, an official discussion paper on the status of Himalayan glaciers had created a controversy owing to the argument that Himalayan glaciers which nourish several great rivers such as the Indus, Ganges, and the Brahmaputra, have not retreated abnormally. This paper had been issued by the Ministry of Environment and
Forests, Government of India a couple of years ago. Besides, the statement made by the Union Minister of State for Environment and Forests, Mr. Jairam Ramesh added fuel to the controversy. According to his statement, there was no conclusive evidence to show that global warming was responsible for the glacial retreat. His view
challenged the findings of the Intergovernmental Panel on Climate Change (IPCC). This Nobel Prize-winning international body of scientists, the IPCC, had released its comprehensive Fourth Assessment Report on Climate Change two years ago prior to it. The Report clearly pointed out that glaciers and ice caps provided the most visible
indications of the effects of climate change. TheHimalayan glaciers were receding faster than in any other part of the world.The Himalayas have the largest concentration of glaciers outside the polar region. These glaciers cover an area of 33,000 km. Seven of Asia’s greatest rivers including the Brahmaputra, Ganges and Indus are fed with this water.

Don’t Miss: Water Resources of India
We should not lose track of the fact that the water availability downstream depends to 50% on snow and glacial
melting both in short and long terms. Studies have shown that most of the Himalayan Glaciers are melting faster than the world average and are endangered to melt in the next 40 years.Studies have found that approximately 67 percent of Himalayan glaciers are retreating with an alarming rate. For example, in the last few decades, 82 percent in West China have retreated. With decreasing ice and snow and with them water storages, in the high altitudes, the water availability downstream will more and more depend on the direct run- off from rain and oil evaporation rates. So, there will be water shortages in dry seasons. Due to glaciers’ retreat, the glacial lakes will grow rapidly and at the same time, new glacial lakes will occur. Glaciers are generally considered to be highly efficient agent of erosion. Glaciers tend to remove all the weathered and easily erodible rock and soil and leaving behind valleys with fresh hard walls, hard to erode.That is why, the erosive potential of rivers is less effective in new glacier ­shaped valleys, than in comparable regions without recent glacial history. Glacier-fed rivers are mostly loaded with a high
amount of sediment and sediment load increases the erosion potential. On the other hand, sediments accumulate at the bottom of U-shaped valleys with low-gradient floors and decoupling the hill slopes from the channels and therefore as well from the destructive force of rivers. It is because of this that in some areas, the erosive force of glacier-fed rivers is reduced. Denudation rates are higher in glaciated regions than in unglaciated. Moreover, cold dry conditions slow down erosion dramatically. It is due to this that the erosion rate in the northern high Himalayas is extremely lower today than it was during times of widespread glaciation. Warmer climate would increase chemical weathering and biotic activity in the watersheds at the timescale of 102-103 year and produce easily erodible material in the high altitudes.Climate change of global warming, however, affect the hydrological conditions and glaciology. Increasing temperature causes the following : a warmer air has the ability to contain more moisture. The availability of water increases the rate of evaporation. That is why the water vapour in the atmosphere is on the rise. The moisture in the atmosphere acts like greenhouse gases. Besides, with warmer air and water temperatures, the loss of snow and ice by melting is growing. The snow and ice cover have decreased which has been noticed more clearly during spring and summer. During summer, melting is faster than in winter, because compared *to winter more sunlight is absorbed in summer. With bigger warming of the earth surface a rising long-wave radiation occurs
and this causes an increase of air temperature. The precipitation changes in intensity. The precipitation form is changing from snow to rain. As a result of higher melting rate of snow and ice, the soil moisture is increasing. The modification of the discharge depends on changes in volume and timing of precipitation and the form of precipitation. The evaporation affects the run-off to decrease. The bigger melting rate affects the changes in glacier levels. The amount of changes depends on river inflows, precipitation, and evaporation.As we have already seen, the glacial retreat is the most significant impact of global warming in the mountain region. The glacial retreat can be measured by horizontal length changes or vertical through the thickness and volume changes. The glacier melting comprises several processes within the glacier, like changes in the glacier flow, basal sliding, and internal deformation. In addition, a rising air temperature has an effect on the mass and energy balance of the glacier surface. A melting glacier shows the appearance of surging and calving. Surging glaciers start all of a sudden and flow up to 100 times faster than usual. Thereafter, the glacier contains deep crevasses and disruptions on the glacier surface. Glacier retreating causes following hydrological impacts : Rising sea level; changes in run-off—increasing run-off resulting in floods and decreasing run-off, resulting in water stress and glacial lake formation. We have already discussed that the bigger melting rate results in bigger discharge of glacier-fed rivers. But, if the run-off of a glacier-fed river decreases, i.e. if the glacier gets smaller or disappears, the effect is water shortage in the catchment area.Read Also: Rivers, Waterfalls, and Glaciers

The Intergovernmental Panel on Climate Change pointed out in its comprehensive Fourth Assessment Report on Climate Change some years ago that if the Himalayan glaciers continued to recede at the rate existing at that time, there was a very high risk of their disappearing by the year 2035, perhaps sooner too. According to it, measures had to be taken to curb warming of the earth at the prevailing rate. It warned with a view to making people aware of the fact that water scarcity could affect more than a billion people in Asia itself. Water shortages, it is a common knowledge now, mean a big threat for 500 million inhabitants of the Indus, Ganges and Brahmaputra river basins, who rely on permanent supply of melt-water from the Himalayas. The problems of water stress are already or ‘never’ to this evil practice of prevalent in the region due to increasing demands of domestic consumption, agriculture, industry and an ever- increasing population. Any future reduction in the availability of freshwater would have serious consequences for the economy, environment and daily life of people living within the affected area. India has already power-shortages problem (10 percent total electrical energy, 20 percent of peak capacity requirements) and in view of rising demand of energy, the likelihood of inadequate hydropower in the future has serious implications for the development plans of the whole country. Industries like food processing, mining, paper, chemical and steel production would suffer badly, because they need a secured water supply.

The Ministry discussion paper which had given birth to a controversy regarding melting of Himalayan glaciers had been prepared by Mr. V.K. Raina, ex-Deputy Director General, Geological Survey of India. Though in the paper, he had agreed that glaciers in the Himalayas, except a few, had been in constant retreat since mid-19th century, they had in no way exhibited, especially in the recent years, an abnormal annual retreat of the order that some glaciers in Alaska and It would be, therefore, premature to state that these glaciers were retreating because of global warming. Mr. Raina also went on to say that the Gangotri glacier, which fed the Ganges, was practically at a standstill for the last two years. Mr. Rajendra Pachauri, Chairman, IPCC, criticised both the discussion paper and the then Union Minister of State for Environment and Forests, Mr. Jairam Ramesh. According to him, this research was unsubstantiated. As Syed Iqbal Hasnain, a leading glaciologist thought, the discussion paper was biased and unscientific. A group of scientists at Indian Space Agency’s Space Applications Centre, Ahmedabad used satellite images to study 466 glaciers in the Chenab, Parbati and Baspa basins. They found that the glaciers had shrunk by 21 percent since 1962. The report was published in 2007. Some time back, the space scientists had carried out a study and came to the conclusion that a one degree Celsius rise in temperature by 2040 would more than halve the area occupied by the glaciers which fed a particular tributary of Sutlej. Now, a layman is free to speculate whether global warming is related to the melting of Himalayan glaciers or not.

The Ocean and The Sea: Forms and Benefits

Biodiversity and Its Conservation