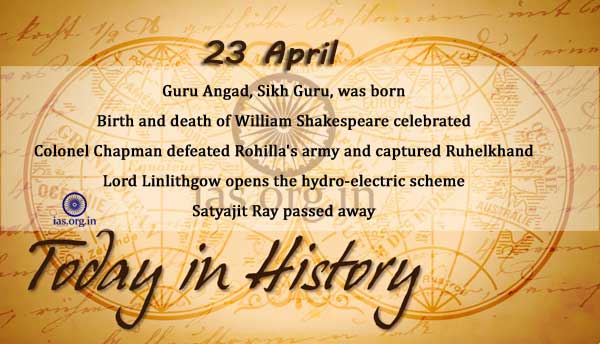 The great English dramatist and poet William Shakespeare was born in Stratford-on-Avon on April 23, 1564. It is impossible to be certain the exact date on which he was born, but church records show that he was baptized on April 26, and three days was a customary period of time to wait before baptizing a newborn. Shakespeare died on the same day in 1616.

Political Committee of Asian-African Conference at Bandung adopted an Indian resolution calling for a ban on atomic weapons.

Soviet cosmonaut Vladimir Komarov is killed when his parachute fails to deploy during his spacecraft’s landing. Komarov was testing the spacecraft Soyuz I in the midst of the space race between the United States and the Soviet Union.