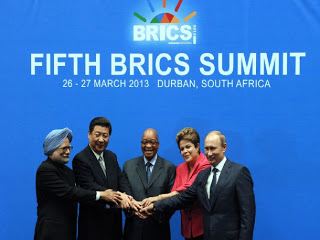 There is no denying the fact that in spite of all the domestic problems regarding good governance and political logjams, India has a vitality to appear on the global stage , since both regional order and global governance are in flux . At such a time , 5th BRICS Summit , which took place on March 26 -27, 2013 in Durban , South Africa represented a uniquely appropriate platform and flexible mechanism with India making its presence felt in a significant measure. Before leaving for Durban , Prime Minister Dr. Manmohan Singh had made it clear to the Media that he hoped to discuss a number of issue with leaders of others BRICS nations , as also with those from Africa invited to the Summit.
Must Read:
Analysis of 13th EU-India Summit
Nuclear Security Summit (NSS)
© Newspaper WordPress Theme by TagDiv