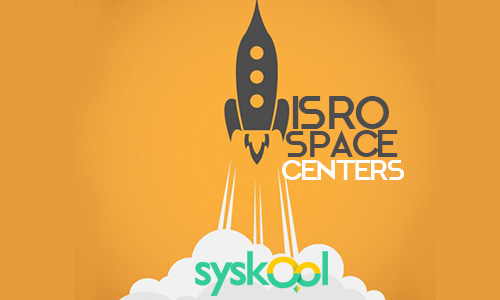 Research and development activities under the space program are carried out in various centres/units of ISRO/DOS. The major projects of ISRO are executed by identified lead centres depending upon the technology base established in them.

The VSSCC is located at Thumba in Thiruvananthapuram. It has establishments at Valiamala for major facilities of PSLV project and Vottiyookavu for development of composites. And Ammonium perchlorate experiment plant is located at Alwaye. VSSC is the largest ISRO Centre. It provides the technology base for the country’s indigenous satellite launch vehicle development efforts. The centre is also responsible for the development of several spacecraft subsystems. Supporting these products are specialised R&D groups in avionics and mission dynamics, solid propulsion, propellants and chemicals, materials and mechanical systems, etc. VSSC also supports Rohini Sounding Rocket (RSR) Program. The Space Physics Laboratory (SPL) is also located in VSSC.

The ISAC at Bangalore is the lead Centre for satellite project of ISRO. The Centre is responsible for design, fabrication, testing, and management of satellite systems for scientific, technological and application missions. Aryabhata, Bhaskara, Apple and IRS-1A satellite with built here. At present IRS and INSAT series of satellites are being built in this centre.

The center is located in Sriharikota island on the east coast of Andhra Pradesh. It is the main launch base of satellite launch vehicle and sounding Rockets full stop the launch center was named as Satish Dhawan Space Centre (SDSC) in 2002 in memory of Professor Dhawan, who was chairman of ISRO from 1972 to 1984. The country’s largest, Solid Propellants Space Booster Plant (SPROB) is located here. The center also has Static Test and Evaluation Complex (STEX) and computerized data processing facility to support indigenous launch vehicle missions.  The main facility in the centre include those of production of solid propellant rocket boosters, ground and environmental qualification of rocket motors and their subsystems, integration check out and launch of satellite launch vehicles, liquid propellants, and cryogenic propellants storage and servicing facilities, tracking and telecommand stations, real time data processing, and range and flight safety. Liquid propulsion systems Centre

Space Applications Centre at Ahmedabad is involved in research and development in space applications. It has the primary responsibility to conceptualize, plan and execute projects and research program leading to practical use of space technology. The activities include satellite-based telecommunications and television, and Remote Sensing for natural resources survey and management, environmental monitoring, Meteorological, and geodesy. The center is organized functionally into satellite communications, remote sensing and microwave remote sensing.  Support services provided by Technical Services Group consisting of environmental test facilities, electronics and mechanical fabrication facilities and reliability and quality assurance group. SAC also operates Delhi East Station (DES) for satellite communication.

That DECU at Ahmedabad is involved in various areas of software research such as television program production, policy studies and research in society-technology interaction. The major activities being carried out at DECU is at present include Training and Development Communication Channels (TDCC), GRAMSAT Program including pilot projects for the states, telemedicine, EDUSAT pilot projects and new satellite communication applications.

ISTRAC, with its headquarter at Bengaluru, operates a network of ground stations at Bengaluru, Lucknow, Sriharikota, Port Blair and Thiruvananthapuram in India as well as some outside stations; to provide tracking, telemetry and Command (TTC) support for the launch vehicle and satellite missions of ISRO. Development of software packages and operation of network stations at present and future missions are the responsibilities of ISTRAC. It has a multi mission spacecraft control center at Bengaluru. The unit has established S-band receiver only station in Mauritius to support the IRS mission. The ISTRAC also operate the satellite tracking and ranging station STARS at Kavalur in Tamil Nadu and the Local User Terminal (LUT)/Mission Control Centre(MCC) under the international program for satellite aided search and rescue.

The IISU, which is located at Thiruvananthapuram is responsible for design and development of inertial systems both for satellite and launch vehicle such as Momentum/reaction wheels, solar array drives, rate gyro packages, etc.

The NRSA at Hyderabad is an autonomous institution supported by the DOS. The agency has facilities of surveying, identifying, classify and monitoring earth resources using aerial and satellite data. The analysis, computation, and interpretation facilities are located in Hyderabad, and satellite reception station is located in Shadnagar, near Hyderabad. The earth station has facilities to receive data from Remote Sensing Satellite such as LANDSAT and NOAA USA, SPOT of France, the European Union’s ERS. NRSA also operates the Indian Institute of Remote sensing (IIRS) at Dehradun.

The PRL at Ahmedabad is the premier National Centre for Research in space and allied Sciences. It is an autonomous institution supported mainly by the DOS. The PRL is also entrusted with the management of the Udaipur Solar Observatory. Its main research programs are thus in the Solar planetary physics, infrared astronomy, geo-cosmo physics, theoretical physical including climatology, plasma physics and laboratory astrophysics, archaeology and hydrology. Its 1.2 meters reflecting IR telescope is installed at Gurushikhar near Mount Abu in the largest of it’s all kind in the country.

The MCF is located in Hassan in Karnataka and is responsible for initial orbit raising, payload testing and in-orbit operations of all geostationary satellite.

The MCF has integrated facilities comprising satellite control Earth stations with associated electronics. The Satellite Control Center (SCC) is the nerve center of satellite control operations. A backup of MCF (MCF-B) with an essential facility to manage the satellite operations is being established in Bhopal, Madhya Pradesh.

The NMRF is a national facility set up at Gadanki near Tirupati, in Andhra Pradesh. It is an autonomous society supported largely by the DOS.  the facility is available for National and international scientists to conduct atmospheric research. In addition to MST radar, facilities such as Rayleigh/Mie Lidar, lower atmospheric wind profiler, disdrometer, optical rain gauge and automatic weather station have also been set up.

The NE-SAC, located at Shillong, was set up as an autonomous society in December 200  jointly with North Eastern Council to promote a space technology and to ensure its benefit to the population in the North Eastern region. NE-SAC addresses areas in natural resource management and developmental communications, besides encouraging Space Science research in the reason.

The Antrix Corporation Limited, Bengaluru, is the apex marketing agency under the DOS with access to the resource of DOS as well as Indian Space Industries. Antrix markets of systems and components for satellites, undertakes contracts for satellites to user specification, provides launch services and tracking facilities and organizes training of Manpower and software development.