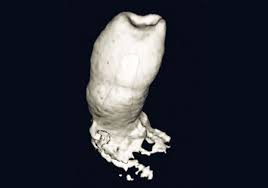 In a breakthrough, scientists at King C Liege London, England said on March 10, 2013, that they had successfully managed to grow real teeth from scratch generated from a person’s own gum cells. The feat, which was achieved for the first time ever, is a significant improvement upon existing implant-based methods, where whole tooth replacement fails to reproduce a natural root structure. As a consequence of the friction from eating and other jaw movements, loss of jaw bone can occur.

In their experiment, the researchers first isolated adult human gum (gingival) tissue from the patient. They grew more of it in the lab and then combined it with the cells of mice that form teeth (mesenchyme cells). By Transplanting this combination of cells into mice, the researchers were able to grow hybrid human/mouse teeth containing dentine and enamel, as well as viable roots.