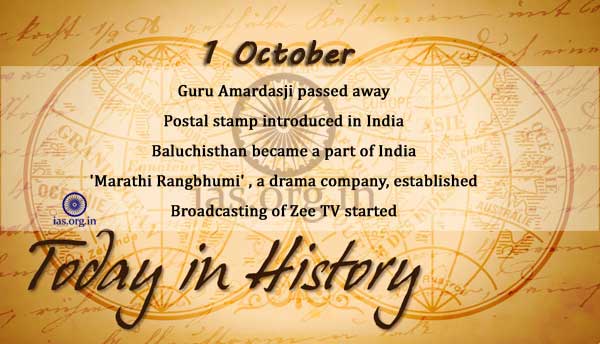 In Paris, the National Legislative Assembly holds its first meeting.

The British government decides to send a punitive naval expedition to China.

Annie Besant, famous philosopher and thesophist, was born in London.

Postal stamp introduced in India. These lithographed stamps were of denominations of half anna and one anna.

Baluchisthan became a part of India.

The Ford Model T, the first car for millions of Americans, hits the market.

Balkanji Bari Institute established for the welfare of children.

No. 3 Squadron, similarly Audax-equipped, was raised at Peshawar.

First flight of F-86 Sabre jet fighter, which would win fame in the Korean War.

The first new state in India since 1949, Andhra Pradesh, is established on purely linguistic basis and formally inaugurated.

Metric System of weights was introduced in India.

Nigeria becomes independent from the UK.

In the Child Marriage Act, minimum age for marriage was raised to 21 year for males and 18 years for females.

Constitution’s 75th amendment bill to extend President’s rule in Punjab for another six months fails through the first stage in Lok Sabha for want of a simple majority.