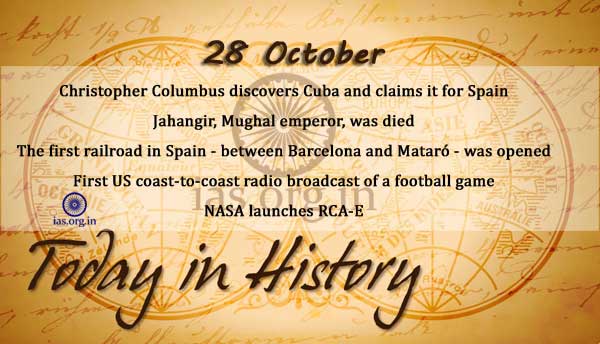 Christopher Columbus discovers Cuba and claims it for Spain

The first university in the New World, the Universidad Santo Tomas de Aquino, was established on Hispaniola.

Jahangir, Mughal emperor, weak from asthma and no food, died at Bhimghar near Kashmir. He was buried at Shahdara (Lahore) on the banks of the Ravi.

The first railroad in Spain – between Barcelona and Mataró – was opened.

Gandhiji reaches London. Lives on vegatarian diet. Takes lessons in dancing and music for a short time, thinking they are necessary parts of a gentleman’s equipment.

First US coast-to-coast radio broadcast of a football game

Benito Mussolini took control of the government of Italy.

Gandhiji leaves for Calcutta. Riots break out in Bihar.

US pledges to rush arms to India.

Insurance Bill is introduced amid protest in the Lok Sabha.

NASA successfully launches the Ares I-X mission, the only rocket launch for its later-cancelled Constellation program.