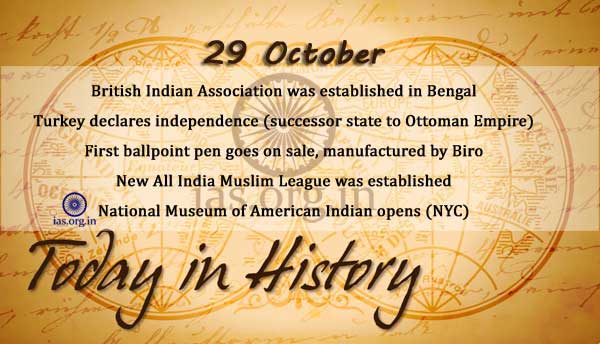 King Cyrus The Great of Persia marches into the city of Babylon, releasing the Jews from almost 70 years of exile and making the first Human Rights Declaration.

First trial for witchcraft in Paris.

British Indian Association was established in Bengal with Radha Kanta Dev as president and Devendranath Tagore as the Secretary.

Jamia Milliya Islamia was founded by Dr. Jakir Husain and his collegues at Aligarh. ‘Khilafat’ and the Non- Cooperation Movement were an integral part of policy animating.

Pandit Jawaharlal Nehru is sent back to prison for two years following a speech he made at Allahabad the day after his release from jail.

Amalgamation of the Steel Corporation of Bengal with Indian Iron and Steel Company Ltd. to be effective from 1st January 1953 under the latter’s name.