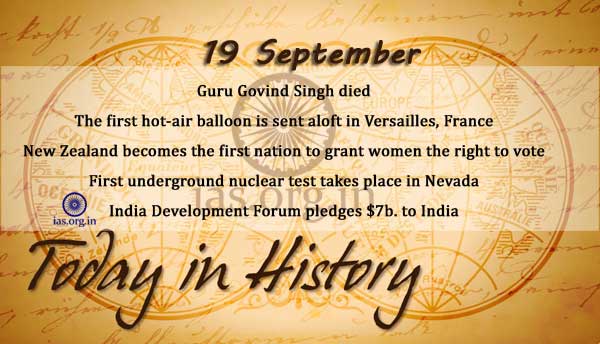 In a landmark battle of the Hundred Years’ War, English Prince Edward defeats the French at Poitiers.

Guru Ramdasji died. His son Arjun Dev succeeded him and changed the offerings to the Guru into a regular tax.

The first hot-air balloon is sent aloft in Versailles, France with animal passengers including a sheep, rooster and a duck.

The first railway to span a frontier is completed between Strasbourg and Basel, in Europe.

New Zealand becomes the first nation to grant women the right to vote.

Moscow announces it will withdrawal soldiers from Korea by the end of the year.

Sindhu River water-sharing settement was signed between India and Pakistan.

Government extends ultimatum to India to dismantle forts within four days in China.

Rajeev Goswami, a student of Delhi University, attempts to self immolate himself in protest against the implementation of Mandal Commission Report.

Lok Sabha passes unanimously the Places of Worship Special Provisions Bill for maintaining the status quo of religious places as on 1947.