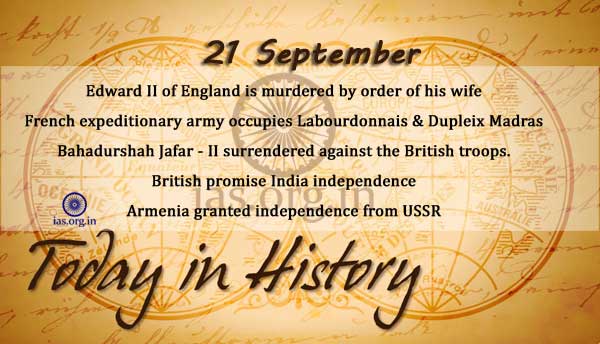 Edward II of England is murdered by order of his wife.

Fighting between China and the Soviet Union breaks out along the Manchurian border.

The German army holds its largest maneuvers since 1914.

Formation of Press Trust of India (PTI) announced under an agreement signed between Reuters and Indian and Eastern Newspapers Society.

Major General I J Rikhye completed the task in accordance with the memorandum to UNSF, thus fulfilling the mandate of cessation of hostilities without any incident.

The Officers Training School (OTS) women were inducted into the Army as Officers, and the onerous task of training the Lady Cadets of WSES (O) courses commenced at the OTS.

Rumors that statues of the Hindu god Ganesh were drinking milk spread in New Delhi.

Galileo space mission ends as the probe is sent into Jupiter’s atmosphere where it is crushed.