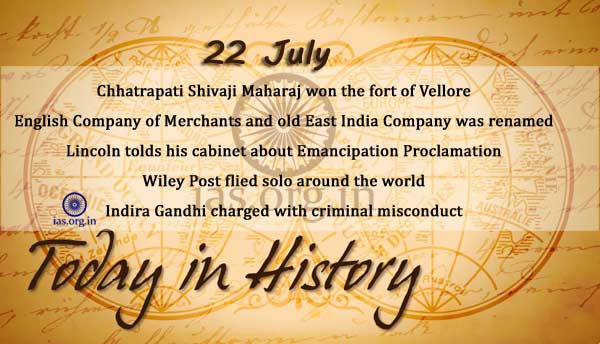 On this day in 1862, President Abraham Lincoln informed his chief advisors and cabinet that he will issue a proclamation to free slaves, but adds that he will wait until the Union Army has achieved a substantial military victory to make the announcement.

In San Francisco, a bomb attack at a Preparedness Day parade on Market Street killed 10 people and wounded 40. The bomb was hidden in a suitcase. The parade was organized by the city’s Chamber of Commerce in support of America’s possible entrance into World War I.

During the First World War, India’s first fighter pilot Indra Lal Rai’s plane was shot down in battle by Germans planes near London. Rai had fought for Britisher’s Force.

American aviator Wiley Post returned to Floyd Bennett Field in New York, having flown solo around the world in 7 days, 18 hours, and 49 minutes. He was the first aviator to accomplish the feat.

New industrial policy for liberalisation of economies announced in Parliament.

Swiss Justice ministry revealed that Hindujas, Quatrocchi and Win Chadha are among the seven appellants fighting to prevent the transfer of Bofors pay off names to India.

24-year old P T Usha won bronze medals in the 400m and 200m races and anchored the 4x100m relay team to gold and 4x400m for silver at the Asian Track and Field Championships in Fukuoka, Japan.

On this day in 2003, U.S. Army Private Jessica Lynch, a prisoner-of-war who was rescued from an Iraqi hospital, received a hero’s welcome when she returns to her hometown of Palestine, West Virginia.