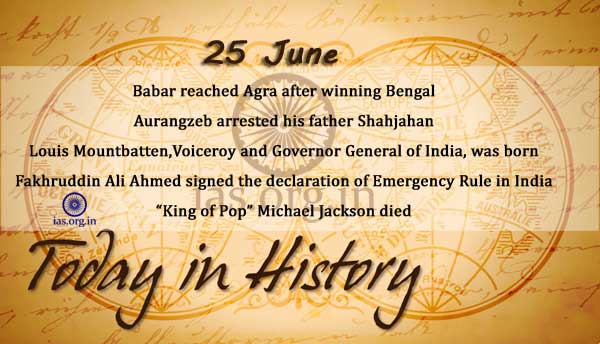 Babar reached to his capital Agra after winning Bengal.

Congress passed the Mann Act, also known as the White Slave Traffic Act, which was ostensibly aimed at keeping innocent girls from being lured into prostitution, but really offered a way to make a crime out of many kinds of consensual sexual activity.

India played their first official test match on the ground of Lords against England.

USA & India signed a new bilateral treaty for the extradition of fugitive offenders.

Sikh high priests exonerated the Akali Dal leader and chief of the Shiromani Gurdwara Parbandhak Committee, Gurcharan Singh Tohra, of charges of violating a “Hukumnama” (religious edict) issued by the Akal Takht, which had prescribed a complete boycott of the members of the Nirankari missions for their ”blasphemous” activities.

The Government agrees on the bifurcation of the Telecom Ministry.

On this day in 2009, Michael Jackson, one of the most commercially successful entertainers in history, died at the age of 50 at his home in Los Angeles, California, after suffering from cardiac arrest caused by a fatal combination of drugs given to him by his personal doctor.