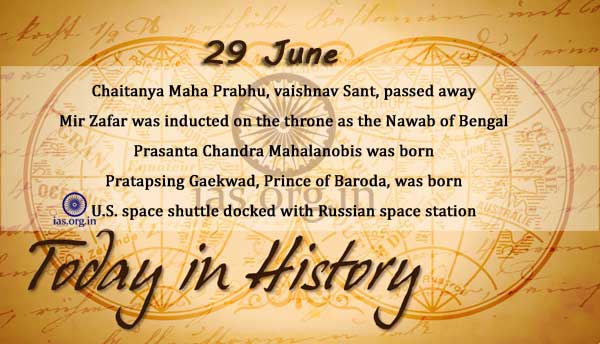 Mir Zafar was inducted on the throne as the Nawab of Bengal, Bihar and Orrisa from Murshidabad.

On June 29, 1958, Brazil defeated host nation Sweden by 5-2 and won its first World Cup. Brazil came into the tournament as a favorite football team, and did not disappoint, thrilling the world with their spectacular play, which was often referred to as the “beautiful game.”

Congress (I) nominated K. R. Narayanan for the Vice-Presidentship.

On this day in 1995, the American space shuttle Atlantis docked with the Russian space station Mir to form the largest man-made satellite ever to orbit the Earth.

The Election Commission derecognised seven regional parties in some states — Samata Party in Haryana, Shiv Sena in Dadra and Nagar Haveli and the RJD in Manipur, NTR-Telugu Desam Party in Andhra Pradesh, the Samajwadi Janata Party (Rashtriya) in Chandigarh, the United Minority Front in Assam and the Haryana Vikas Party in Haryana- These will remain registered but unrecognised parties.