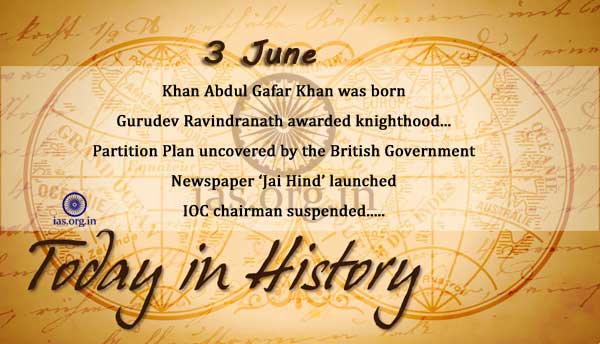 Some 7,000 Union troops were killed within 30 minutes during the Battle of Cold Harbor in Virginia.

The classic baseball poem “Casey at the Bat,” written by Ernest L. Thayer, was published in the San Francisco Examiner.

Mahakavi G.Sankara Kurup, Malayalam poet, was born. He was the first winner of the conveted Gyaanpeeth Award in 1965 for his poems “”Odakkuzhal”” in Malayala.

Sir’ knighthood was granted to Gurudev Ravindranath Tagore by the British Government.

British Government issued the partition plan, which was worked out by Lord Louis Mountbatten in New Delhi and was accepted by both Muslim League and Congress.

The week comprising of five working days was implemented in Central Government Offices for its staff.

The naval version of the surface-to-air missile, Trishul, was test-fired in Kochi.

Flight Lieutenant K. Nachiketa was handed over by the International Committee of the Red Cross to the Indian High Commissioner inside the High Commission premises.

Today in History- 30 May