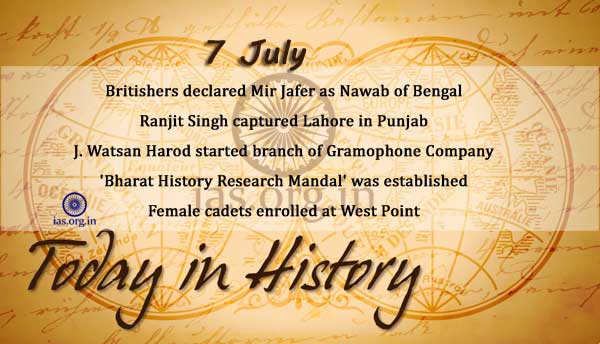 For the first time in U.S. history, the House of Representatives exercised its constitutional power of impeachment and voted to charge Senator William Blount of Tennessee with “a high misdemeanor, entirely inconsistent with his public duty and trust as a Senator.”

According to Sir Arthur Conan Doyle’s stories, Dr. John H. Watson was born on this day. Coincidentally, the author died on this day in England at the age of 71.

30,000, people went to Calcutta along with weapons to fight the British army.

Mary Surratt was the first women who was executed by the U.S. government for her role as a conspirator in Abraham Lincoln’s assassination.

Six Language penel were started on the Rs. five denomination again. The printing colour of note changed to Red with Special text mentioned, ‘At any office of issue not situated in Burma’.

On this day in 1917, British Army Council Instruction Number 1069 formally established the British Women’s Auxiliary Army Corps (WAAC), authorizing female volunteers to serve alongside their male counterparts in France during World War I.

On this day in 1930, construction of the Hoover Dam began. Over the next five years, a total of 21,000 men worked ceaselessly to produce what would be the largest dam of its time, as well as one of the largest manmade structures in the world.

Rasbehari Bose handed over the command of ‘Azad Hind Fauz’ to Netaji Subhashchandra Bose at Singapore.

Gandhiji addressed the A.I.C.C. meeting at Bombay; Congress accepted the Cabinet Mission plan of May 16.

For the first time in history, women were enrolled into the United States Military Academy at West Point, New York. On May 28, 1980, 62 of these female cadets graduated and were commissioned as second lieutenants.

The Indian Army recaptured Jubar height in the Batalik sector.