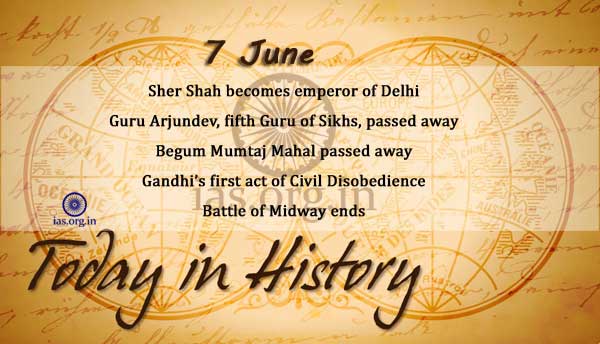 Sher Shah defeated Humayun near Buxar at Chausa and became emperor of Delhi.

Begum Mumtaj Mahal, wife of Shah Jahan, Emperor of India, passed away at Burhanpur a few hours after the birth of a daughter. She was married in 1612 and the Taj Mahal was built for her.

On this day in 1692, a massive earthquake devastated the infamous town of Port Royal in Jamaica, killing thousands. The strong tremors, soil liquefaction and a tsunami brought on by the earthquake combined to destroy the entire town.

Mohandas K. Gandhi, a young Indian lawyer working in South Africa, refused to comply with racial segregation rules on a South African train and was forcibly ejected at Pietermaritzburg.

On this day in 1913, Hudson Stuck, an Alaskan missionary, lead the first successful ascent of Mt. McKinley, the highest point on the American continent at 20,320 feet.

King George VI became the first British monarch to visit the United States when he and his wife, Elizabeth, crossed the Canadian-U.S. border to Niagara Falls, New York. The royal couple subsequently visited New York City and Washington, D.C., where they called for a greater U.S. role in resolving the crisis in Europe.

On June 7, 1942, the Battle of Midway–one of the most decisive U.S. victories in its war against Japan–came to an end. In the four-day sea and air battle, the outnumbered U.S. Pacific Fleet succeeded in destroying four Japanese aircraft carriers with the loss of only one of its own.

Indian Army troops, sent to Punjab to quell Sikh violence, stormed the Golden Temple in Amritsar, the holiest of Sikh shrines. More than 400 persons were reported killed in the assault at the shrine, including Jarnail Singh Bhindranwale.

Sq. Ldr. Sanjay Thapar of IAF became the first Indian to jump from a parachute and hoist the national flag at the North Pole.

Mahesh Bhupathi became the first Indian to win a Grand Slam title when he and Japan’s Rika Hiraki claim the mixed doubles.