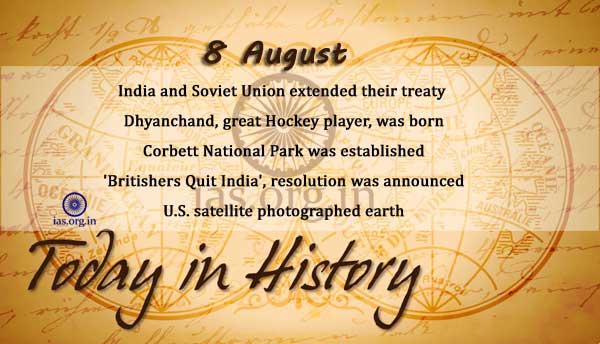 George Davidson, a prominent astronomer and explorer, impressed Alaskan Native Americans with his ability to predict a total solar eclipse.

Following the end of a heavy monsoon, parts of India was hit by a cholera epidemic.

At five o’clock on the morning of August 7, 1914, French troops launched their first attack of World War I, advancing towards the city of Mulhouse, located near the Swiss border in Alsace, a former French province lost to Germany in the settlement ending the Franco-Prussian War in 1871.

On this day in 1947, Kon-Tiki, a balsa wood raft captained by Norwegian anthropologist Thor Heyerdahl, completed a 4,300-mile, 101-day journey from Peru to Raroia in the Tuamotu Archipelago, near Tahiti. Heyerdahl wanted to prove his theory that prehistoric South Americans could have colonized the Polynesian islands by drifting on ocean currents.

India concluded a treaty with Bhutan.

Dr. Homi J. Bhabha was elected as the chairman of the international conference on the Peaceful Uses of Atomic Energy.

From the Atlantic Missile Range in Cape Canaveral, Florida, the U.S. unmanned spacecraft Explorer 6 was launched into an orbit around the earth. The spacecraft, commonly known as the “Paddlewheel” satellite, featured a photocell scanner that transmitted a crude picture of the earth’s surface and cloud cover from a distance of 17,000 miles. The photo, received in Hawaii, took nearly 40 minutes to transmit.

The U.S. Congress passed Public Law 88-408, which became known as the Tonkin Gulf Resolution, giving President Johnson the power to take whatever actions he deems necessary to defend Southeast Asia including “the use of armed force.”

Central government, for the first time since independence, suffered a token defeat in the Lok Sabha.

The North Vietnamese newspaper Nhan Dan reported that the People’s Republic of China (PRC) has signed a new agreement to give Hanoi an undisclosed amount of aid in the form of an outright grant.

India and Soviet Union extended their treaty of peace, friendship and co-operation for 20 more years.