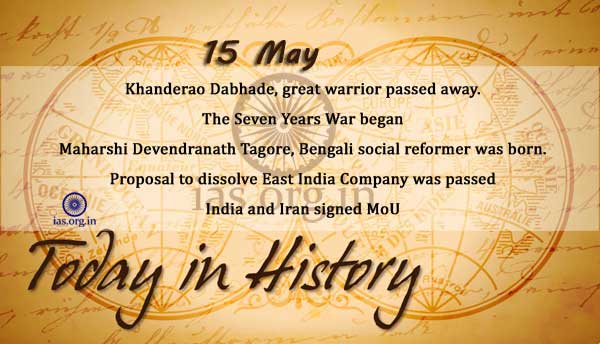 The Seven Years War, a global conflict known in America as the French and Indian War, officially begins when England declares war on France. However, fighting and skirmishes between England and France had been going on in North America for years.

Mahavirprasad Dvivedi, famous Hindi litterateur, poet, writer and editor, was born at Daulatpur village in UP.

The proposal to dissolve East India Company was passed in England.

Sivnath Shastri and Ananda Mohan Bose, under the leadership of the younger group of Brahmo Sama, rebelled and started Sadharan Brahmo Samaj.

On May 15, 1941, the jet-propelled Gloster-Whittle E 28/39 aircraft flies successfully over Cranwell, England, in the first test of an Allied aircraft using jet propulsion. The aircraft’s turbojet engine, which produced a powerful thrust of hot air, was devised by Frank Whittle, an English aviation engineer and pilot generally regarded as the father of the jet engine.

On this day in 1942, gasoline rationing began in 17 Eastern states as an attempt to help the American war effort during World War II. By the end of the year, President Franklin D. Roosevelt had ensured that mandatory gasoline rationing was in effect in all 50 states.

On May 15, 1963, Gordon Cooper is launched into space aboard Faith 7 on the longest American space mission to that date. Faith 7 was the capstone of Project Mercury, the NASA program that put the first American into space in 1961 and the first astronaut into orbit in 1962. Cooper completed 22 orbits of the earth and spent 34 hours in space. He was the first American astronaut to spend more than a day in space. On the afternoon of May 16, Faith 7 landed safely in the Pacific Ocean, four miles from the recovery ship Kearsarge.

K.M. Cariappa, field marshal and Major General, passed away at the age of 93.

The 11th Lok Sabha constituted as Election Commission submits a list of 534 successful candidates to President.

The BJP and at least 13 of its allies rename themselves the National Democratic Alliance.

Today in History -13 May

Previous articleGovind Jaiswal, IAS – The Rickshawallah’s Son
Next articleToday in History – 16 May