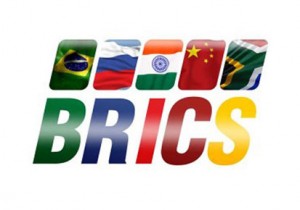 BRICS is the acronym for an association of five major emerging national economies: Brazil, Russia, India, China and South Africa. The grouping was originally known as “BRIC” before the inclusion of South Africa in 2010. The BRICS members are all developing or newly industrialized countries, but they are distinguished by their large, fast-growing economies and significant influence on regional and global affairs; all five are G-20 members.

The BRIC grouping’s first formal summit, also held in Yekaterinburg, commenced on 16 June 2009, with the respective leaders of Brazil, Russia, India, and China. The summit’s focus was on means of improving the global economic situation and reforming financial institutions and discussed how the four countries could better co-operate in the future.

The BRICS Forum, an independent international organization encouraging commercial, political and cultural cooperation between the BRICS nations, was formed in 2011. In June 2012, the BRICS nations pledged to boost the lending power of the International Monetary Fund (IMF). In March 2013, during the fifth BRICS summit in Durban, South Africa, the member countries agreed to create a global financial institution which they intended to rival the western-dominated IMF and World Bank.

The grouping has held annual summits since 2009, with member countries taking turns to host. Prior to South Africa’s admission, two BRIC summits were held, in 2009 and 2010. The first five-member BRICS summit was held in 2011. The most recent BRICS summit took place in Durban, South Africa, in March 2013.

The economic potential of Brazil, Russia, India and China is such that they could become among the four most dominant economies by the year 2050. The thesis was proposed by Jim O’Neill, the global economist at Goldman Sachs. These countries encompass over 25% of the world’s land coverage and 40% of the world’s population. On almost every scale, they would be the largest entity on the global stage.

Jim O’Neill of Goldman Sachs, the same creator of the term “BRIC” endorses the term MINT that includes Mexico, Indonesia, Nigeria and Turkey. In order to differentiate among the variety of emerging economies. He plans to group this quartet as “growth markets” within the overall BRIC nations.